Development of a Process for Recovery of Rare Earth

Minerals from Bastnäsite and Monazite Minerals 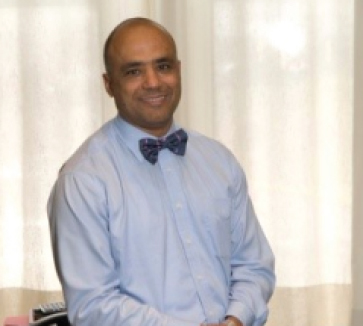 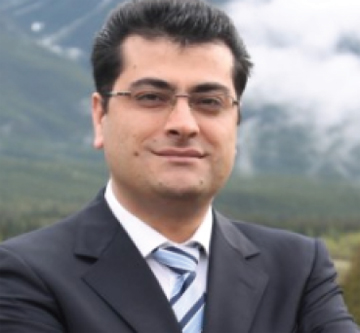 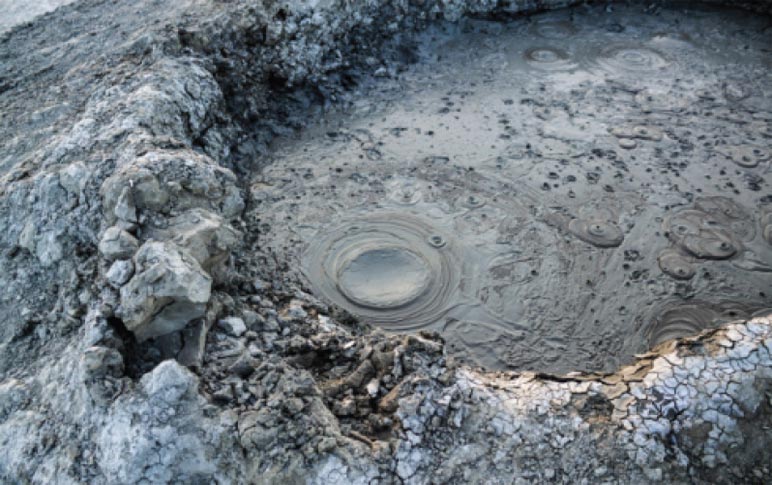 The rare earth elements (REEs) are the lanthanide elements in the periodic table as well as scandium and yttrium. REEs are called rare not because their abundance is low, since they can be found in different deposits, but because their extraction from the related minerals is difﬁcult.

Recovery of the rare earth elements from the original deposit includes different steps such as geology, mining, ore physical beneﬁciation, concentrate thermal cracking and hydrometallurgy and separation of individual elements. As mentioned before, the recovery process is very difﬁcult and as a result the total process would include a complex network of unit operations.

Under professor Chaouki´s leadership, this is actually a collaborative research and development (CRD) network sponsored by Natural Science and Engineering Research Council of Canada (NSERC) and Niobec Inc. as the industrial partner. Academic partners of the network are Ecole Polytechnique, Mc Gill University and Laval University. There are 9 research projects across this network that are being carried out by 4 PhD students, 5 masters students and one research associate.

The objective is developing REE processing unit operations and provide new research opportunities for development of an operational process for recovery of REEs from bastnäsite and monazite minerals in a long term. Training high quality people (HQPs) is also another important objective of this research network. 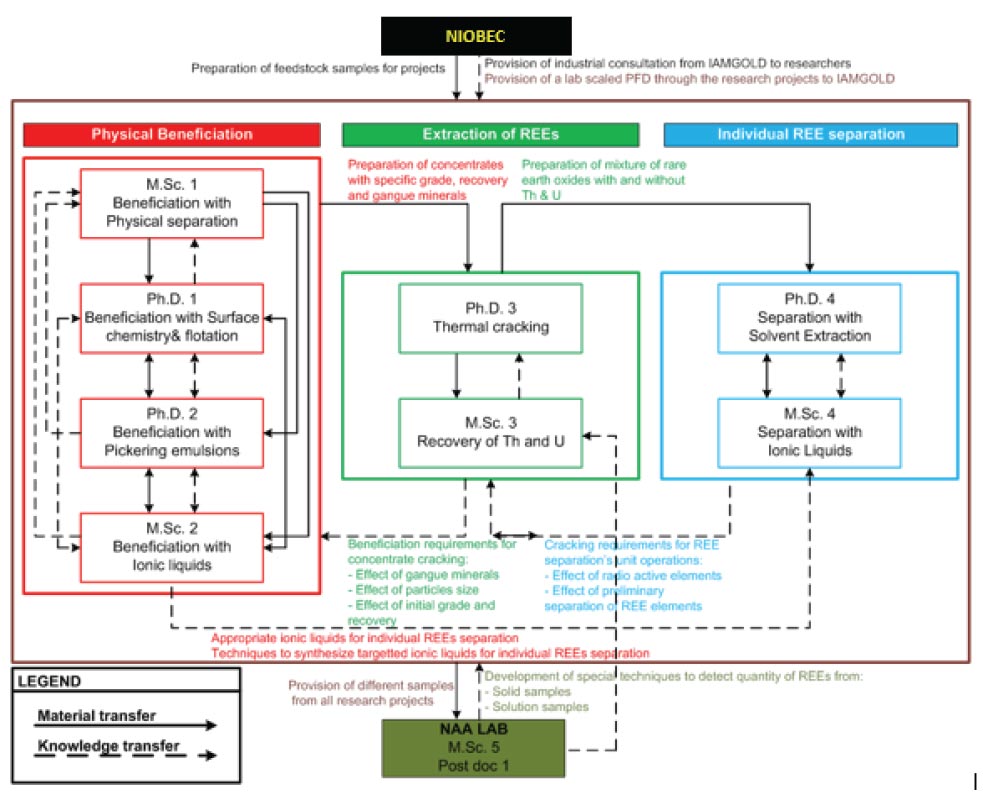 Pickering emulsions are widely used in different industries such as cosmetics, food processing, paint, petroleum, petrochemicals, mining and etc. This research investigates the application of solid-stabilized emulsion (SSE) as a novel technique to separate the valuable solid particles from powder mixture and especially in the case of rare earth bearing minerals (REE’s mineral) in the physical beneﬁciation processes. The technique can be used as an alternative to ﬂotation or even as a supplement with one of the up/downstream processes to increase the performance of beneﬁciation. The economic issues and environmental nightmares of the conventional ﬂotation are brieﬂy discussed whereas SSE can open new perspectives while no surfactants are used. This research evaluates the potential of using the surface properties of the REE’s mineral ore particles in conjunction with specially tailored oils to form a stabilized emulsion in the early stages of the processing and focus on the separation performance index along with the parameters related to demulsiﬁcation and phases separation. It is expected that the separation could be render more selective towards the fractions of interest containing captured REE bearing minerals (Bastnaesite and Monazite). A semi-empirical quantitative method is developed to measure the concentrates base on the numerical size distribution, mass fractions and the wettability of the particles. 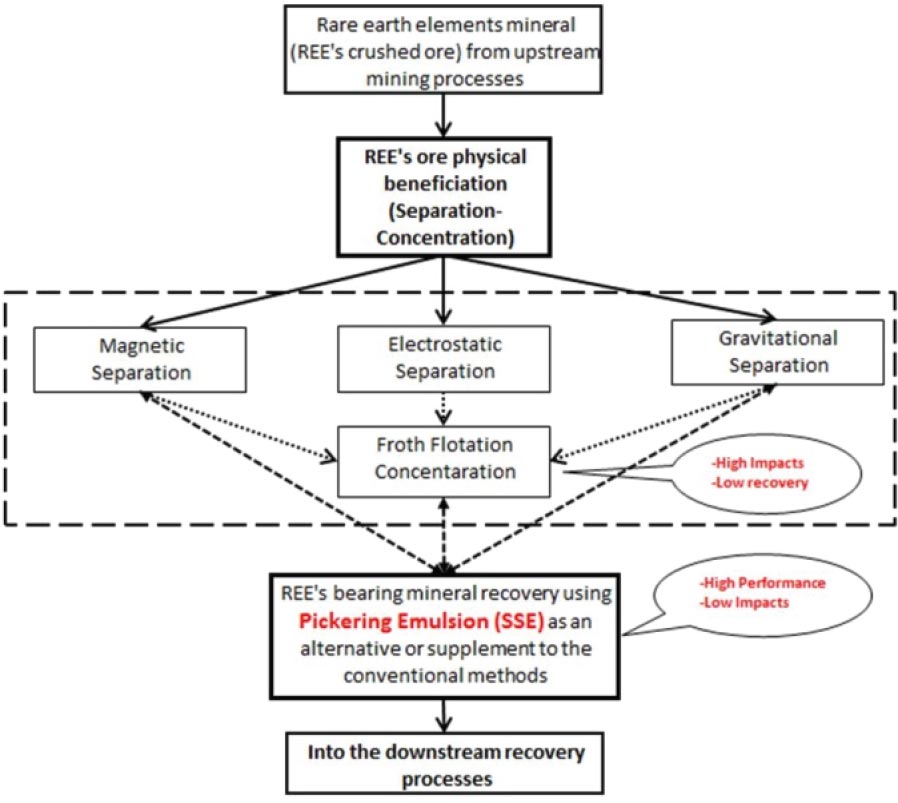 The increasing demand of rare earth element (REE) due to their many applications, mainly in advanced materials and new technologies, makes the research for its production attractive. However, its production is mostly developed in China, while the rest of the world is a step behind in the process concerning the REE production.

REEs are found signiﬁcantly in minerals such as monazite, bastnaesite and xenotime. Once extracted, to treat those minerals, three main operations are necessary: physical beneﬁciation, hydrometallurgy or pyrometallurgy and individual separation of REEs. This research focuses on the extraction of REEs associated to bastnäsite and monazite minerals from the gangue by the mean of different combined processes.

Once extracted from the gangue, the main concern about REEs is their association with radioactive elements (thorium and uranium), present in the REEs bearing minerals. In order to satisfy an eco-friendly production of REEs, Th and U must be effectively separated. To ensure this separation, a selective precipitation of the radioactive elements is achieved.

In both operations of the REEs extraction, the minimization of REEs loss is essential since its economic value is high.

The rare earth elements (REEs) are the ﬁfteen lanthanide elements in the periodic table as well as scandium and yttrium with atomic numbers of 21 and 39. The increasing number of applications of rare earth elements in industry has led to a growing interest in developing techniques for extracting these elements. A reliable and accurate characterization technique is needed to determine the concentration of the REEs at each step of the separation process. Neutron activation analysis (NAA) is a common technique for analyzing solid samples containing minerals. However, when analyzing high concentrated samples, neutron self-shielding and gamma-ray attenuation effect are among the major challenges which can cause up to 35% uncertainty in the results. In this research we will develop an enhanced NAA method that will incorporate the neutron self-shielding model coupled with the gamma-ray attenuation model to correct the results for these effects. After the implementation of each model, we will analyze a large number of prepared samples of known concentration, for which we will gradually increase the complexity. We will speciﬁcally focus on measuring the impact of variable individual rare-earth ratios on the accuracy of the results. This aim implies that the sensitivity, the quantiﬁcation, and the resolution of a particular combination of are-earth ratios will be fully addressed. The ﬁnality will consist of NAA rare-earth analysis protocols tailored for each step of a rare earth reﬁning technique.